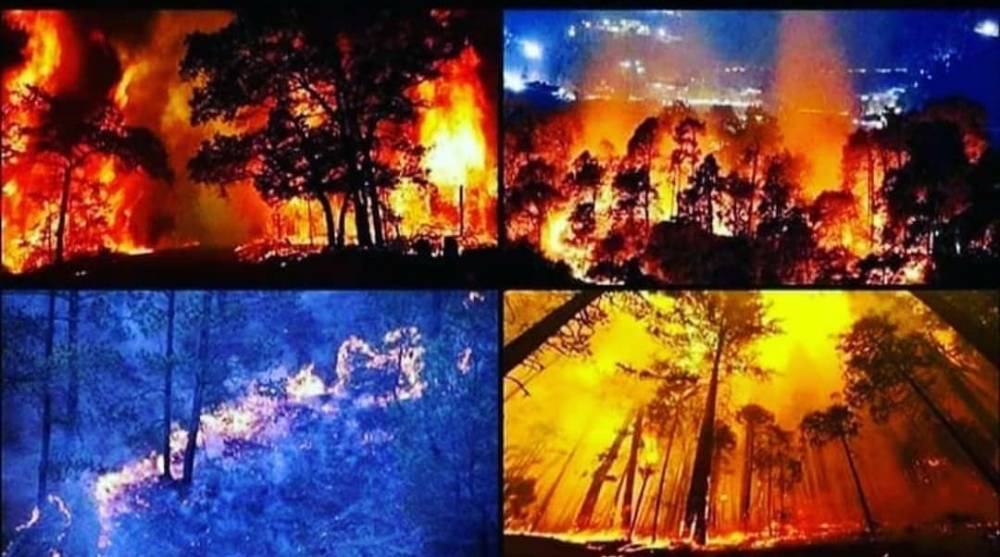 In Uttarakhand, the last four days of fire in the forests have started to take a severe form and spread to many areas. The fire is spreading rapidly due to the summer season and the dry tree leaves of forests. In Uttarakhand, every effort is being made to extinguish Saturday's fire in the jungles of the Srinagar area of Pauri-Garhwal district, but it is not being named as an extinguishing. Two people are reported to have died due to the fire, and the environment, along with wild animals, has also suffered a lot. However, anyone doesn't know about the cause of the fire.

"About 5-6 hectares of forest has been burnt to ashes in the area," says Forest Department official Anita Kunwar. There have been constant efforts to extinguish the fire, but the fire has not been controlled due to strong wind and dry wood in the forest, leaves. Many more teams are being called now." In the summer days, dry leaves and thatch in the hilly areas cause fire due to some reasons, which takes a fiery look. In Uttarakhand, a similar fire broke out last year in which more than 2,000 hectares of forest were burnt to ashes.

Apart from Pauri-Garhwal, two hectares of forest have been burnt down due to fire in Didihat range of Pithoragarh for the last few days. Eight incidents of fire have occurred in the Didihat forest area in the last four months, with about 13 hectares of forest burning so far. It is reported that due to incessant rains this year, there was a lot of moisture in the forests, leaving the forest fire, but as soon as the moisture began to decrease, the forest was engulfed in flames. Vinay Bhargava, divisional forest officer, Pithoragarh, says, "The rise in temperature is likely to increase the incidence of forest fires. Because of this, the officers and staff of the department were alerted. As soon as the forest fire is reported, the forest department teams are on the spot and efforts are on to extinguish the fire. The fire spreads rapidly due to strong wind and heat, and there are difficulties in extinguishing, but it will be controlled soon."

Forest fires cause a lot of damage to the state's forests ecosystem, biodiversity and economic losses every year. In addition, many rare and other wildlife are also killed. There have been incidents of fire in the forests of Uttarakhand almost every year. In 2019, a petition was filed in the Uttarakhand High Court, seeking an independent agency to probe the fire incidents. The petition also said that two national parks – Jim Corbett National Park and Rajaji National Park – are under threat due to forest fires. In 2016, there was a massive forest fire that had not been extinguished for several days. In 2016, more than 4,500 hectares of forest fires were destroyed. Since the formation of a separate Uttarakhand state in 2000, about 45,000 hectares of forest fires have been reported.

The forest department gets information about the fire, but there is no mechanism to prevent the fire from being taken up. The forest department cleans the fire line in the month of December-January, but sometimes there is negligence in the preparation of fire lines, which does not control the fire with immediate effect. In Uttarakhand, pine forests are in large quantities, and pine leaves catch fire very quickly. One thing more important, often the fire is either imposed by people or is casually sounded. The incidence of fire itself is very low. Some scientists also insist on developing water harvesting and groundwater use techniques within the forest to control forest fires. Though these arrangements have been made in many places, they are still inadequate in the jungles of Uttarakhand.

Read also: You Should Not Use Hand Sanitizer In These Situations: Read Here Why?

How To Handle Money While Facing a Pandemic Crisis: Tips To Keep in Mind