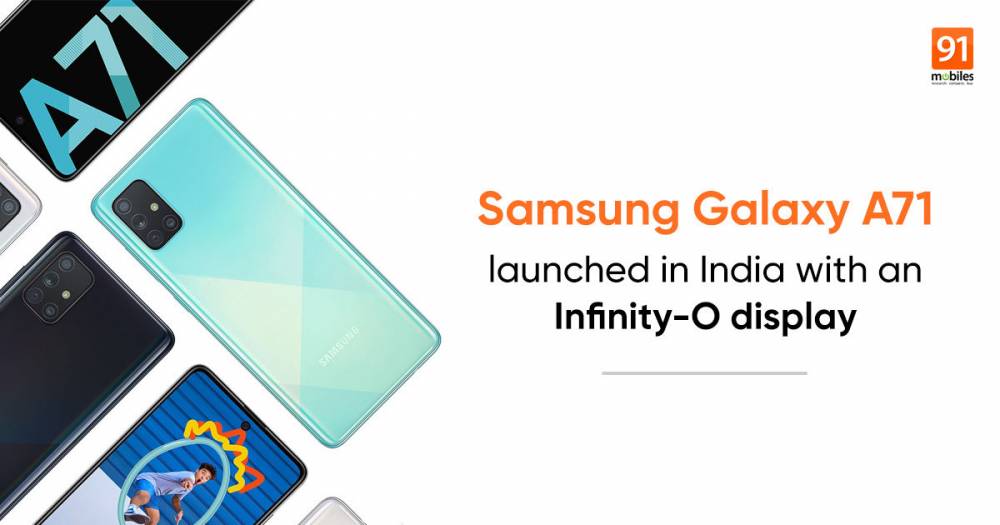 The Samsung Galaxy A71 has been launched in India today, and the smartphone has replaced the last Galaxy A70. Samsung's new phone has come with an infinity-O display, and a quad-camera is given on the back of the phone. The Galaxy A71 works on one UI, including Android 10. In Vietnam, the phone was introduced in two variants, while in India, it has launched in a single variant. Samsung launched this phone to compare with phones like Vivo V17 Pro, Oppo Reno, Redmi K20 Pro, and OnePlus 7.

Samsung Galaxy A71 has been launched with a 6.7-inch Full HD + display, which is a Super AMOLED Infinity-O display and has an aspect ratio of 20:9. The phone is powered by a Qualcomm Snapdragon 730 octa-core SoC paired with 8GB of RAM. The phone has 128GB of storage, which can be increased to 512GB with the help of a micro SD card. If we talk about the camera, this phone is getting a quad-camera setup, which has a 64-megapixel primary sensor, and it comes with an f/1.8 aperture lens. The second is a 12-megapixel secondary camera, which is an ultra-wide-angle lens of f/2.2 aperture. Apart from this, two 5 megapixel depth and macro sensors have been kept, whose aperture is f / 2.2 and f / 2.4 respectively. A 32-megapixel selfie camera is available on the front of the phone, and its aperture is f / 2.2. For connectivity, the phone has 4G VoLTE, Wi-Fi, Bluetooth, GPS/A-GPS, and USB Type-C ports are passed. The phone gets an in-display fingerprint sensor, and the device has a 4,500mAh battery and has been given 25W fast charging support.

Read also: As per RBI soon one rupee notes will be in circulation again: Read here history and price of it