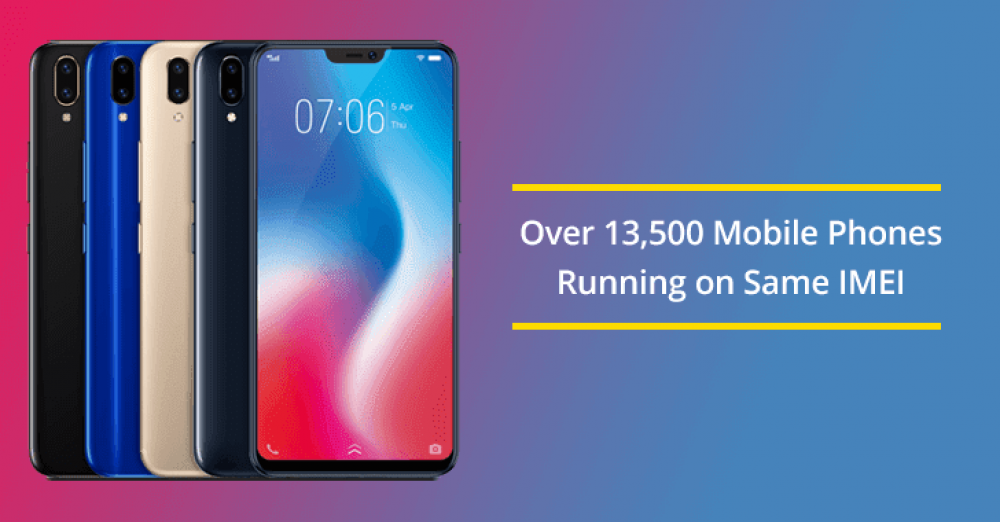 The case has been registered against the mobile company after the entire case was examined by the cyber cell. The case was reported when a sub-inspector posted in the additional DGP's office of Meerut Zone got his mobile phone damaged and went to the mobile company's service center to get it corrected. Even after the mobile was repaired from the service center, it was frequently problematic. As a result, the police department's cyber cell phone showed its phone and found that more than thirteen thousand handsets of the same company were working on this IMEI number.

The police department was shocked after the case came to the fore. It is reported that the work of so many handsets at the same number is a matter of serious concern in terms of safety. Meerut District Superintendent of Police Nagar Akhilesh Singh said, the case has been registered, and the entire case is under investigation. According to the police, criminals can also misuse it. "IMEI number is an important part of any mobile phone. More than one phone cannot have the same IMEI number. If there is any technical defect, it will be investigated, but if there is any conspiracy, there will be stern action against those who do so." ADG Rajiv Sabrawal said that this is a security-related severe matter. According to him, prima facie, the company appears to be negligent, but criminals can misuse it. At present, an investigation team led by cyber cell experts has been formed.

What happens to IMEI number:

IMEI is a 15 digit number that varies for each mobile handset. This is the number that identifies a mobile and tries to locate it from the same number when it is stolen. These numbers are sometimes required to investigate crimes as they are specific to each handset and are recorded in the name of the mobile buyer. Cybercrime experts say the same IMEI number cannot run on other mobile phones. This is not only a violation of the rules but also a safety-related matter. The police have not only issued notices to the mobile company officials but has also filed an FIR against them. The police were not satisfied with the response sent by the mobile company to the notice. The company's distributor has now been involved in the police investigation. ADG Rajeev Sabrawal points out that when Chinese phones entered the market a few years ago, their IMEI number was the same as security hazards. The Government of India had blacklisted all the numbers. The TRAI rules came into force under which an IMEI can be given only to one mobile.

This happened before with Vivo:

A similar case has already surfaced in Jabalpur in Madhya Pradesh. At that time, nearly one lakh handsets were tracked on the same IMEI number. All these mobiles were also from the Vivo company. But at that time, the Jabalpur Crime Branch had said that a private mobile technician was in the hands of a private mobile technician who had misused the demo number found by the company's authorized service center to replace the IMEI of the mobile. Entering any mobile feature requires an IMEI number with a demo from the mobile manufacturer company. The demo number is given to the company's authorized service center. After formatting the mobile using the number, the old IMEI number is entered on the mobile. In a particular situation, all security rules have been framed to change the IMEI number of mobiles, but violations fall under the category of crime. Some companies update mobile software from time to time. The company has been asked to know the security feature to find out how IMEI was easily replaced in Vivo's mobile. The investigation is underway.

Facebook introduces photo transfer tool: Know here how to use it

Join our 74,680 subscribers and get access to the latest tools, freebies, product announcements and much more!