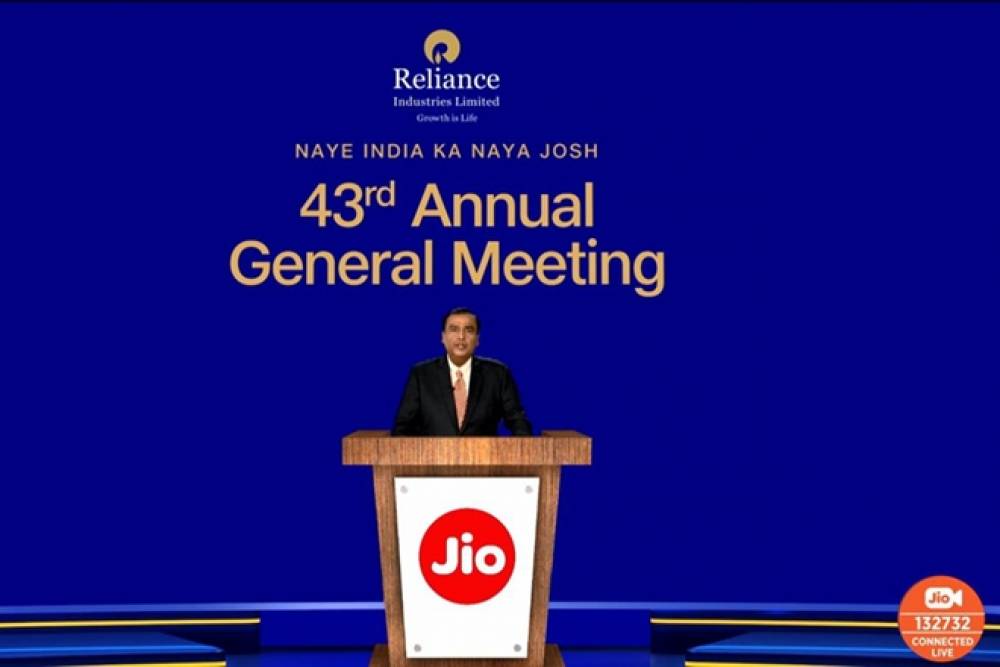 In AGM, Jio has developed 5G technology, the company said to launch 5G technology by next year. At the same time, as soon as 55 spectrum is available, the trials will start.

Talking about becoming a debt-free company of the company. Mukesh Ambani said, "We have already released the company before the deadline of March 2021. The company's achievement will help the company's strong balance sheet growth plan for Jio, retail, and O2C.

Jio Glass: During this AGM, Ambani's son briefed about the company's new project Jio Glass. This is a device that looks like a mere 75 grams of glasses. This device will provide services related to Mix Realty. This will enable connecting to a single cable. It will also have 25 apps that will help in video meetings with AR technology.

Jio TV Plus: Mukesh Ambani's daughter Esha Ambani and Akash Ambani gave full details about the new Jio TV Plus. Now Jio TV Plus will bring Netflix, Amazon Prime, Hotstar, and other OTT platforms to an app. It will also be equipped with a voice search.

WhatsApp technology JioMart: On JioMart, Mukesh Ambani said that it will be launched with WhatsApp technology. At the same time, the business of millions of small shopkeepers in India will be connected. To help customers buy goods from grocery stores.

Operating System: Mukesh Ambani, along with Google and Jio, spoke about creating an operating system. This is 4G/4G of entry-level. 5G will be for smartphones. At the same time, he said, Jio and Google will jointly make India 2G-free.

Reliance Retail: Mukesh Ambani told his Reliance Retail that the main strategy to grow his grocery business is to connect farmers and deliver fresh products to homes.

RIL-BP deal: Mukesh Ambani also spoke about the achievements made by RIL in the field of energy. BP has invested in the Jio platform in its fuel recycling business, he explained.

Clean energy: Mukesh Ambani spoke about the work being done in the field of clean energy, saying Reliance is committed to adopting new technology to convert carbon dioxide into useful products and chemicals.

PPE Kit and N95 Mask: During this AGM, Mukesh Ambani's wife Nita Ambani said that as soon as the coronavirus was introduced, there was a great need for PPE kits in the country during the record time that our company created such manufacturing facility. So that 1 lakh PPE kits and N95 masks can be made every day. He also said that Reliance is providing free fuel across the country for trains engaged in emergency service.

Reliance Foundation: Nita Ambani spoke about the Reliance Foundation's help in the Corona crisis and said that through the mission grain service, food was provided to more than 5 crores poor, laborers, and frontline workers across the country.

Expressing confidence over the corona crisis that is spreading in the country, Mukesh Ambani said that India and the world will rapidly progress amid the corona crisis. Every difficulty also brings with it many possibilities. During this AGM, video messages of Facebook chief Mark Zuckerberg and Google CEO Sundar Pichai were also played. This is the first time Nita Ambani has also addressed RIL's AGM. Let us say that Reliance Foundation chairperson Nita Ambani.

Read also: Things to keep in mind before starting a business