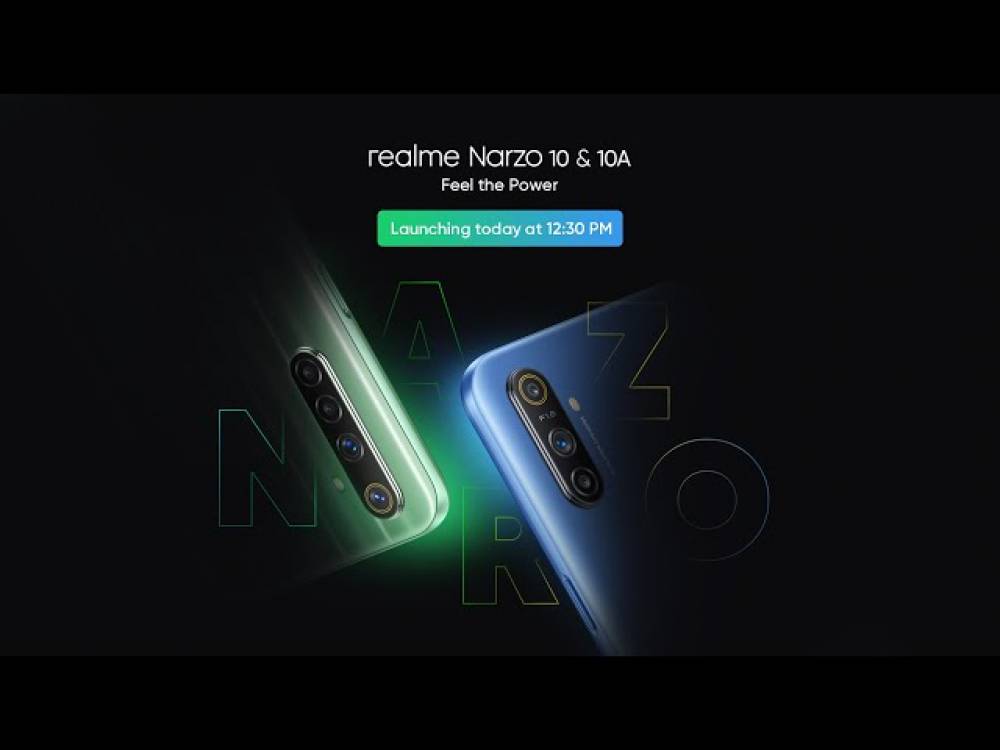 Realme has launched its Narzo 10 series in India. The series has been seen in the news for quite some time, but the launch was further extended after the lockdown due to coronavirus. Narzo 10 and Nazro 10A will reduce the gap between the company's Realme C series and 6 series. The Redmi Note 8 series is available as compared to the series.

Realme Narzo 10's 4GB RAM and 128GB storage variants are priced at Rs 11,999. The phone has been introduced only in this variant. The Narzo 10A is priced at Rs 8,499 and is brought with 3GB ram and 32GB storage. Realme Narzo 10's cell will be offered on May 18 at the Realme India store, and Flipkart and the sale of Narzo 10A smartphone will begin on May 22.

Realme Narzo 10 has been given a new texture back like Realme X Master Edition. The phone has come in two colors, and you can buy it in green and white colors. The device has been unloaded with a polycarbonate case. The phone has a 6.5-inch HD+ display and is brought with a waterdrop notch, with an aspect ratio of 20:9. The device has been given a protections of The Gorilla Glass 3. The phone is powered by MediaTek helio G80 chipset paired with octa-core CPU and Mali-G52 GPU. The phone comes with 4GB ram and 128GB storage and has been given micro SD card support to increase the storage of the device. Narzo 10 works on Realme UI based on Android 10. Narzo has come with a 10 quad-camera setup with a 48 megapixels primary camera, 8 megapixels ultra-wide camera, 2 megapixels macro lens, and 2 megapixels depth sensor. The rear camera can make 4K UHD video recording at 30fps and is given electronic image stabilization (EIS). On the front of the phone, a 16 megapixels selfie camera is placed in the waterdrop notch. The phone has been given a USB Type-C port for connectivity and comes with a 5,000mAh battery. The device also has 18W fast charging support.

The entry-level Narzo 10A comes with a matte finish and is available in blue and white colors. The phone is backed by a 6.5-inch HD+ display and is brought with a waterdrop notch with a front-facing camera. The device has also been given the protection of Gorilla Glass 3. Realme Narzo 10A is powered by MediaTek Helio G70 chipset, which is an octa-core processor and paired with Mali-G52 graphics. The phone includes 3GB of RAM and 64GB storage, which can be increased from the micro SD card to 256GB. The device works on Realme UI based on Android 10. The phone gets a triple camera with a 12MP primary camera and has an aperture of f/2. 1.8. Two other cameras include a 2MP macro and a depth sensor. On the front of the phone, a 5MP selfie camera has been given, which has come with AI beautification. The Narzo 10A comes with a 5,000mAh battery that supports 10W fast charging.

Read also: The largest hole in the Ozone layer on Arctic is now closed: Know here How?

Train Ticket Booking starts from 11th May: Know here how to Book a ticket from IRCTC app