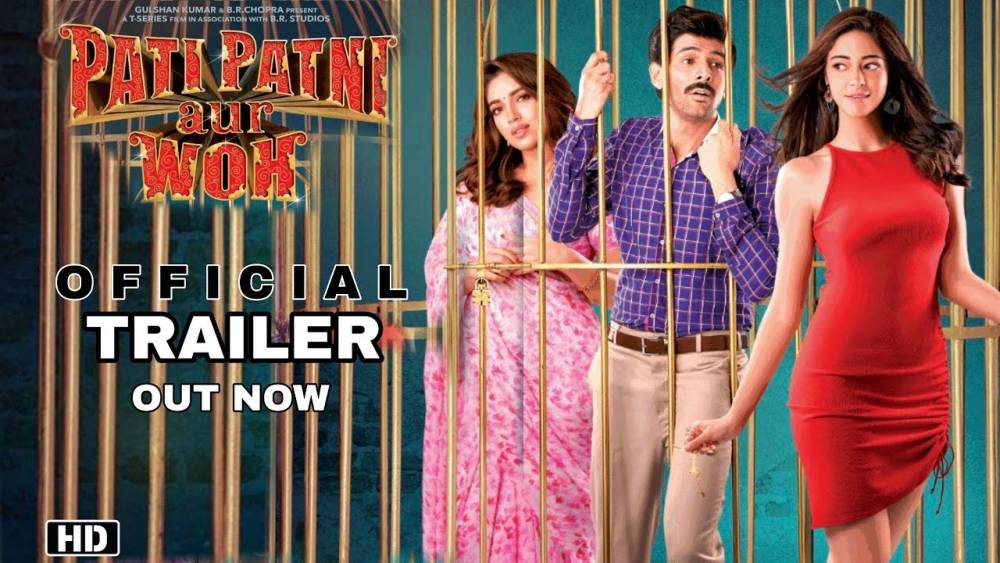 Bollywood actor Kartik Aryan is in the news these days about the upcoming film Pati Patni Aur Woh. Posters of the movie are already viral on social media. The film's trailer was put out on Monday. In the trailer, the enormous chemistry of Kartik, Bhumi, and Anyana is being seen.

Kartik shared the poster in which he and Bhumi Pednekar are seen imprisoned in a cage and Ananya Pandey is outside the cage. Kartik wrote with the poster- Who holds the key to the heart of Chintu Tyagi Patni Aur Woh. Shortly after sharing the poster, the trailer of the movie was released. In the trailer, Kartik Aryan is seen getting caught in the trap of marriage and love things. Apartshakti Khurana is also in an important role in the movie.

In the trailer, the three principal characters are Pati Patni Aur Woh. The first trailer shows how Kartik Aryan is not about as a husband and is unable to bear the burden of responsibilities. The marriage has become a burden for him and he is upset about it. At the same time, Bhumi Pedneakr, who is represented in the role of Kartik's wife, is very happy with the marriage, her husband, and leading a good life. The character of Ananya Pandey has been brought in at the end. Her character's name is Tapasya. She works in Kartik's office. In the entire trailers, Kartik is seen stuck between the lady of the house and the outsider.

The most particular thing in the trailer is the role of Bhumi Pednekar. It was believed that Ananya's character in the film would be bold and Bhumi would be found out in a simple role. Only after watching the trailer, it is clear that the role of the Bhumi is also no less bold than Ananya Pandey. Also, there is so much trouble is Kartik's life, which will make you smile and laugh. The trailer has some double meaning dialogues. In such a situation, it can be judged from the trailer that this film will prove to be full of entertainment for the audience.

Singing about the film, this movie is a remake of the 1978 BR Chopra film Pati Patni Aur Woh. Sanjeev Kumar played the lead role in the movie. His wife's role was played by Vidya Sinha and, Ranjita Kaur played the role of his lady friend. The film was very well received by the audience. If we talk about Kartik's film, it is all set to be released on 6 December 2019.