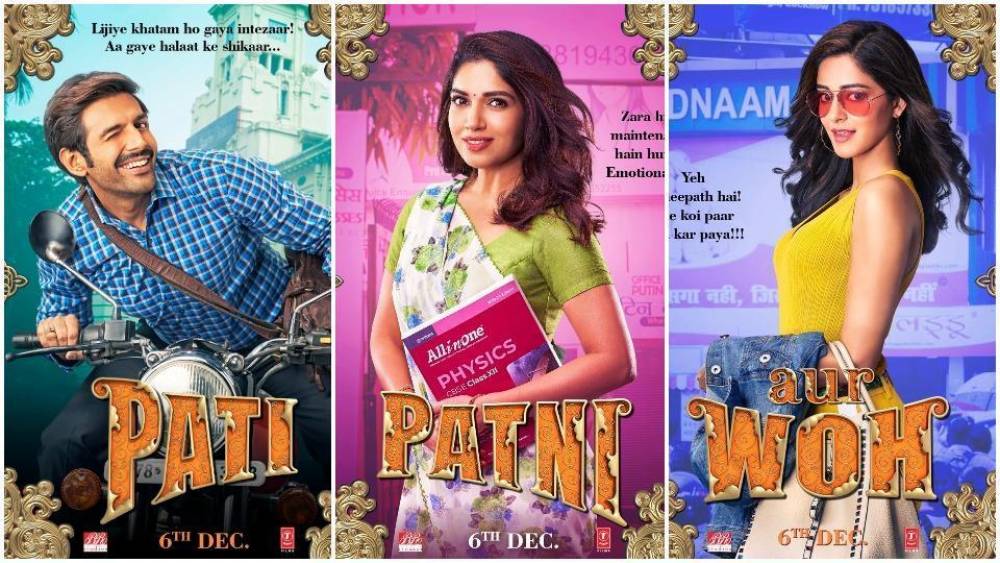 Pyaar Ka Panchnama fame actor Kartik Aryan has made millions of people crazy with only a few films. Now Kartik Aryan will soon be seen in a new character for his fans. Recently the first look of the star cast from the movie 'Pati Patni Aur Woh' has appeared. In these pictures, Kartik Aryan is seen in the character of Kanpur's most idealistic husband. Kartik has shared the look of his wife in this movie, and he along with Kartik as Chintu.

Kartik Aryan recently shared the film Pati, Patni, and Woh look of the movie with his fans from his official Instagram account. Kartik Aryan is playing the role of a common man in this movie. Kartik writes with the photo, ' Hi Kya smile hai, meet Chintu Tyagi, who is most idealist husband in Kanpur.'

Bhumi Pednekar, who is playing the role of wife in the film Pati, Patni, and Wo, has also seen appeared in the first look of this film, in which she is seen in the role of  Vedika, a housewife. Sharing this picture, Kartik Aryan writes, 'where  would a husband like Chintu get a wife like Vedika,

Now in this film, the look of the one who comes between Vedika and Chintu has also been revealed. Kartik Aryan has also shared the look of Ananya Pandey form his account. Seeing this new look at Kartik Aryan, the excitement of all the fans has increased considerably. Pyaar Ka Panchnama's actor has appeared in all his films till now, so it is going to be very fun to see this idealistic look of Kartik Aryan. Before this, Kartik has shared many of his photos from the film's set.

In the poster shared, Kartik Aryan is wearing a check formal shirt and paint, an office crossbody bag, and a mustache on his face with a watch in hand, which gives him look of an ordinary man. Let me tell you that this film is remake of the 1978 film IBR Chopra's film Pati, Patni, and Woh. Mudassir Aziz is directing this film. Now actor Sunny Singh has also been associated with this film. Sunny has previously appeared in 'Pyar Ka Panchnama 2' and 'Sonu Ke Titu Ki Sweety' with Kartik. Sunny Singh will appear in a guest role in this remake.

Director of this film, Mudassar Aziz, said that Sunny Singh's character in the movie would be exceptional, which you would never have seen. Some time ago, Sunny already had told that he and Kartik are very good friends.  Pati, Patni, and Woh movie is going to release on 6 December 2019.