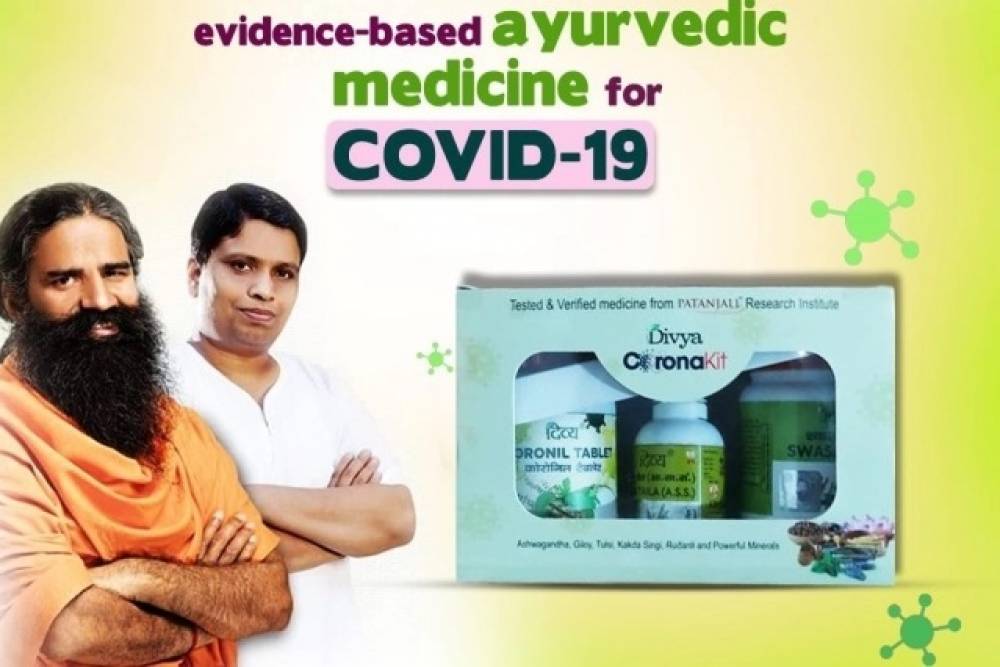 India's yoga guru Baba Ramdev has discovered ayurvedic medicine for the treatment of corona. Yoga guru Baba Ramdev has launched the corona medicine by a press conference today. There is great news for the world, including India, that the global pandemic corona has disturbed all the countries of the world and is engaged in finding its treatment, and now the country has achieved a significant achievement in the coming of this treatment through Ayurveda. Yoga guru Baba Ramdev claimed to have cured corona patients from Coronil tablets. Ramdev said that Coronil medicine has been tried twice, 100 people have been given a drug clinical trial in 3 days, and 69% of patients' reports were negative from positive in 100. Within 7 days, 100% of patients have been cured.

Yoga guru Baba Ramdev said at the press conference that "the moment the whole country and the world were waiting, today we announce that corona medicine has been prepared. The whole world is working on evidence-based medicine. The joint efforts of Prof. Balbir Singh Tomar and our Acharya Ji have produced corona medicine." Yoga guru Baba Ramdev said, "In the clinical case study, we included 280 patients and all recovery took place. There was a controlled clinical trial. Patanjali Research Centre, Parai, and Nims conducted the trial. 95 patients participated, and within 3 days, 69% of the patients recovered, and 100 percent have been recovered within 7 days."

How this medicine was prepared, what elements were used in it, and how effective it would be... Let's know similar important things about this drug.

What herbs are made of coronil:

According to Acharya Balakrishna, CEO, Patanjali Ayurveda, the Scriptures, and Vedas were read and molded into the formula of science to prepare this special Ayurvedic medicine of corona, as a result of which this Ayurvedic medicine could be prepared. Ayurvedic medicine is a mixture of Giloy, ashwagandha, basil, swasari juice, and molecule oil in coronil.

What will be the dosage of the drug?

The company claims that this drug will be effective for corona patients. Because of the clinical trial, the drug has shown a positive effect on corona patients. According to Acharya Balakrishna, the drug can be taken twice a day, in the morning and evening.

According to Patanjali's claim, ashwagandha, the receptor-binding domain (RBD) of the corona present in the drug does not allow the body to meet the angiotensin-converting enzyme (ACE). The corona does not enter the healthy cells of the human body. At the same, Giloy prevents infection of the corona. Tulsi attacks the RNA of the coronavirus and prevents it from increasing the number of multipliers.

According to Acharya Balakrishna, 'Divya Coronil Tablet' will soon be available in the market. On behalf of the company, the Shwasari Vati tablet will also be sold. The swasari juice prevents the formation of thick mucus in the cuff. It also reduces inflammation in the lungs by eliminating the mucus that is formed.

Who prepared the drug, where will the production be:

Where did the clinical trial happen?

Are there any side effects?

Baba Ramdev has said that we have prepared this medicine with comprehensive research. The recovery rate of our drug is 100 percent, while the death rate is zero. That means there is no risk of death. Ramdev said that even if people doubt or question this claim, we have followed all the scientific rules and prepared the drug after comprehensive research and clinical trials.

Where will this drug be, and will be home delivery available?

During the press conference, Baba Ramdev said that the drug made from Ayurveda will be available at Patanjali's store in the next seven days. On home delivery, he said that a mobile app will be launched for online orders on Monday, with the help of which the drug will be delivered at home.

Read also: Now Amazon and Flipkart will show the product is made in Indian or China