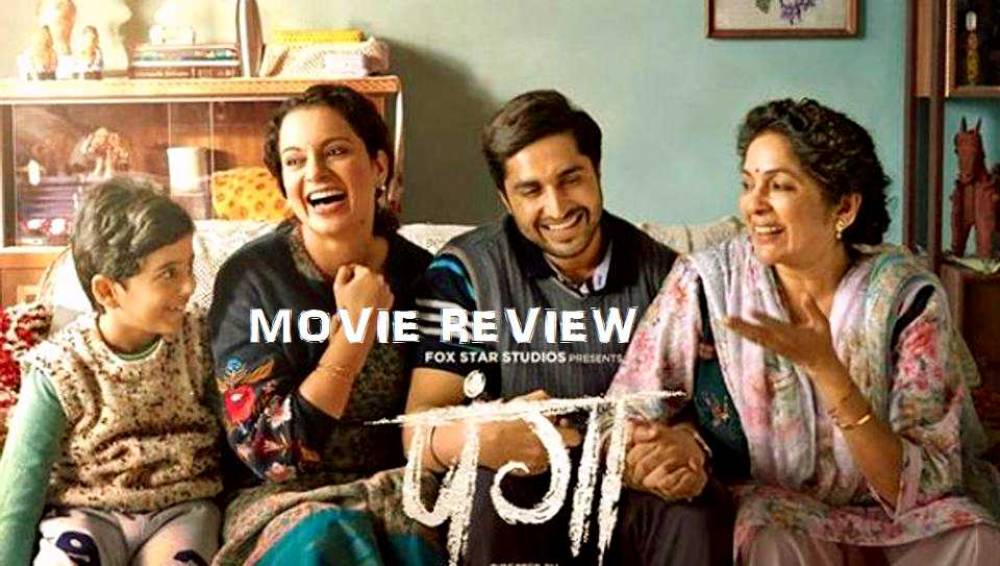 Making a simple film is the hardest thing to do, with no brightness, which does not have the amazing technology, but the content is so luminous, in which everyone is clearly visible. To be sure, making such a simple film is the hardest thing to do. Perhaps that is why we consider filmmakers like Hrishikesh Mukherjee to be glorious even today. Panga pursues the same tradition. This story has been inhabited in the environment of the ordinary middle-class government family. Jaya (Kangana Ranaut) and Prashant (Jassi Gill) live in the railway quarter of Bhopal with son Aditya(Yagya Bhasin). Jaya workes in the railway department. It is her job to give tickets to the passengers. She has got a job in the railways because she has been the captain of the Kabaddi national team. Many medals have been won for the country. But after marriage, she is lost herself doing house and work chores.

After an emotional scene, son Aditya gets the stubbornness of this, his mother should make her comeback. And to accomplish the hair persistence, the parents take this drama. What happens next is woven from the same thread. Talking about acting, Kangana is completely overlapped in Jaya's character. A middle-class woman, her compulsions, her dreams, her past, the details that Kangana has presented, is really commendable. Punjab star Jassi Gill settled in the hearts of the people in the Prashant character. The way they have played the Prashant is loved by them. Richa Chadha is seen in a different form. Though he is not in the main role in the film, her filmography will always mention the film. The most notable has been the character of Bhasin. Small packet big bang. The way the 10-year-old performs on the screen, he does not seem to be acting.

Jaya's mother, Nina Gupta's character, is not long, but her presence increases the strength of the scene. The performance of all other artists was also noteworthy. By and large, Panga is the story of women all over the country who leave their golden careers and future and are crushed in the house-family mill and do not even oops. After watching this film, it can be expected that women who dream of returning to work will pay a little more attention to it as well as their family will be forced to think somewhere!

Director Ashwani Iyer Tiwari has done his job perfectly. Ashwani, who made acclaimed films like Nil Battey Sannata and Bareilly Ki Burfi, once again proved how big things are easily presented on the screen. The idea is huge, but it can be expected. That is why Panga is not just an entertaining film. At the same time, the inspiration. It must be seen.