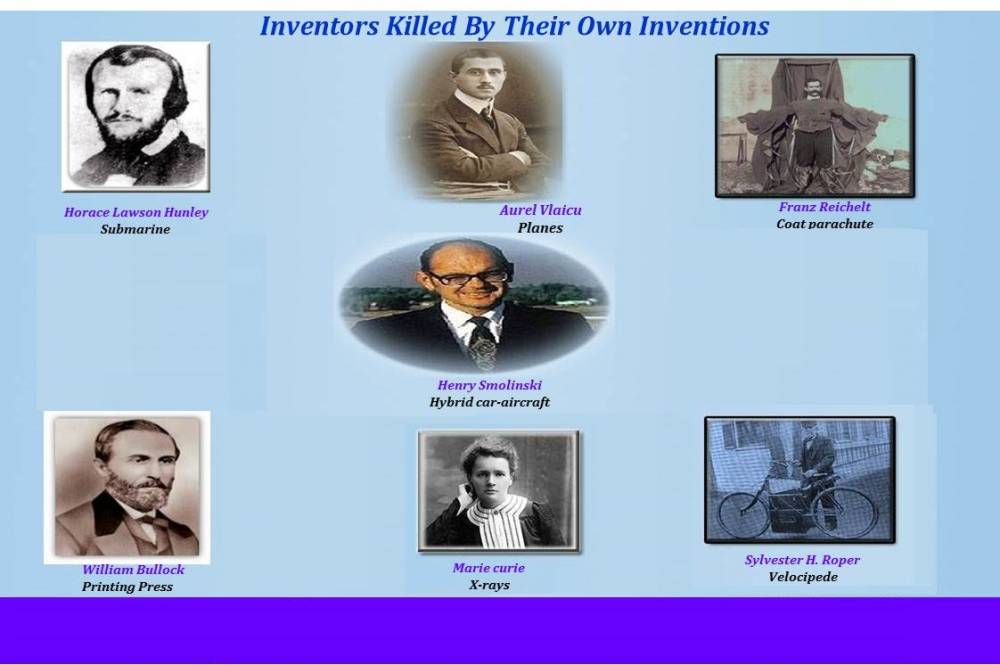 It is not easy to invent anything. It takes scientists for years. Then they are able to succeed somewhere. Today we are going to tell you about some such inventors and their inventions, whose inventions proved very useful, but regrettably, their own inventions became the cause of their death.

Henry Smolinski is known for making flying cars. He invented this in 1973, which he named 'AVE Mizar.' However, when he sat in his flying car to test it and blew it, the car crashed, causing his death.

The handheld submarine was invented by Horace Lawson Hanley, born on December 29, 1823, in Summer County, USA. However, during the test, his submarine was sunk at sea, in which he was also present along with his crew members. He died in this accident.

The famous physicist and chemist Marie Curie, who discovered two elements named radium and polonium, died in 1934 due to this discovery. Actually, Marie Curie was working on radioactivity, but she had no idea of ​​how dangerous radiation is. It had a harmful effect on her body, due to which she died.

Born in Bullville, US, William Bullock is known for improving the 'Rotary Printing Press' made by Richard March Hoey. It was because of him that the printing industry underwent a radical change. However, while fixing his own printing machine, he died by getting stuck in it.

Austria-born Franz Reichelt is considered the inventor of the modern wingsuit. However, he died while jumping from the Eiffel Tower in Paris for testing it. At that time, he was only 33 years old.

The American mechanical engineer and chemist Thomas Midgley is known for his work 'no-knock', i.e., petrol and greenhouse gas. He wanted to tell the world that leaded petrol (gasoline) is absolutely safe. For this, in a press conference, he sprayed petrol on his hand and sniffed it with a flask for about 60 seconds. People believe that he died of this gasoline, but his death was due to his other invention system made of rope and winch. They were made to support his polio-ridden body. On November 2, 1944, he was trapped in this rope and pull system.

Otto Lilienthal was the leader of the aviation industry and is known by the world as Glider King. He was the first person to make a successful gliding flight. His gliding photographs were published in newspapers and magazines in many countries. His work greatly influenced people and scientists. Along with this, gliding dreamed of turning the possibilities of flying machines into reality. On August 9, 1896, Lilienthal fell from a gliding flight flying at an altitude of 17 meters and died on the second day.

Top 10 most watched series and movies on Netflix in India: 'Guilty' running on trending: Know more

WHO warns Indian youngsters about not doing enough outdoor activities! How it's affecting their social and mental health