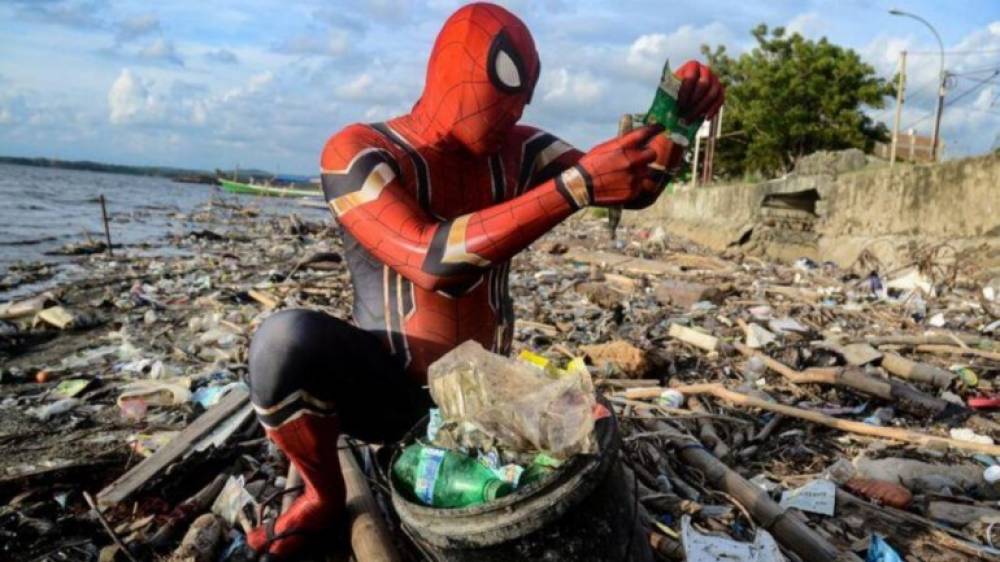 Rudi Hartono, an employee working at a cafe in Parepare, Indonesia, is trying to convince his coastal community to pick up litter scattered on shores and streets like him. Hartono says the first time he did this work without wearing a dress and what that didn't attract public attention. Hartono explains, now wearing a Spider-Man costume, "The reaction of the people found because of this costume is amazing." Many areas of Indonesia lack organized public services to deal with waste, especially to deal with plastic waste. Often the last destination of plastic waste is either a river or a sea. Indonesia is the fourth most populous country in the world. According to a study, Indonesia produces about 32 million tonnes of garbage every year, half of which is found in the sea.

Hartono takes up garbage as Spider-Man before going to work. Because of that, the country's focus has been on the problem of garbage. He has interviewed in multiple newspapers and has reached out to Spider-Man's costume in several TV shows and explained his purpose. Hartono told that he had ever bought a Spider-Man costume to lure his nephew. But by moving forward, he began to convey the message of cleanliness with the same costume. A local resident of Parepare, "We need a constructive model to promote the society's active participation in protecting the environment."  Tons produces garbage. Hartono hopes the government will give more emphasis on his efforts and tighten regulations on the use of single-use plastics. "Reducing plastic waste is the most important task because plastic melting is very difficult," says Hartono.

On the other hand, the government and public institutions are continuously making efforts to deal with waste in India as well. The Indian government has set a target of 2022 to stop the use of discarded plastics once last year. The government wants people to reduce the use of plastics and use cloth bags more and more. The Central Pollution Control Board's survey conducted in 60 major cities in the country revealed that 4,000 tonnes of plastic waste are generated daily from cities. It was estimated that 25,940 tonnes of plastic waste are produced daily from all over the country.  Out of this, only 60 percent, 15,384 tonnes of plastic waste, is collected or recycled, while the rest is found in the sea through rivers and drains.