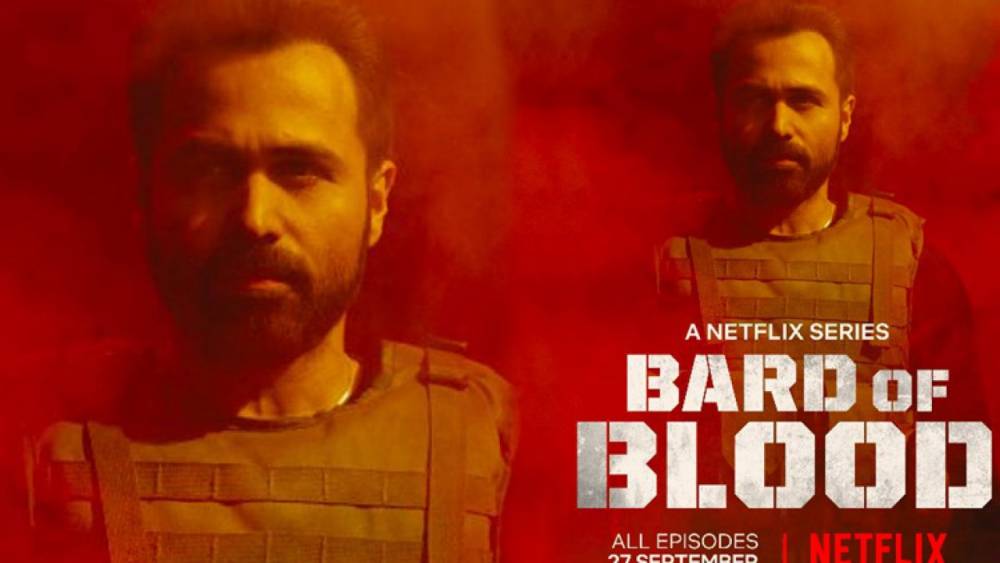 Shah Rukh Khan owned productions house Red Chillies Entertainment ties up with an American media-service provider and productions company Netflix. The ‘Bard of Blood’ seven episodes series will be available on Netflix from 27 September 2019. ‘Bard of Blood’ based on a spy thriller-action novel The Bard of Blood written by Bilal Siddiqi in 2015. It is directed by Ribhu Dasgupta, features Emraan Hashmi in lead role supported by Sobhita Dhulipala and Vineet Kumar Singh. Shah Rukh Khan promoting this series by himself also we can see him in the first look of the series along with Emraan Hashmi.

It is the first time Emraan Hashmi trying his luck on any digital platform; he is playing the character of Kabir Anand. Kabir Anand a former sleeper and intelligence officer was posted in Balochistan, his past hunting him at the same time he got a new mission to rescue four spies hostage which is unofficial. In this series, you will see all aspects of a digital TV series like action, drama, thriller, and adventure. Kabir decided to come back in fieldwork which he left due to any personal tragedy. But this time he is getting extra assistance from his teammates Isha Khanna (Shobhita Dhulipala), she is an analyst in Indian spy agency and Veer (Vineet Kumar), an undercover agent in Balochistan. In this trio, Isha Khanna is the weakest one as she never worked in the field and Kabir has springs to protect Isha every time. As the mission faces obstacles, Kabir, starting to lose his calmness and due to one wrong decision whole mission can go in vain.

Veer facing some issues with his work. He has been neglected long ago by his department and left live life in Balochistan. He is trying to come back to India so he can see his father.

Now it is totally up to audiences will they like Emraan Hashmi in this role and series will get a positive response. In an interview, Emraan Hashmi said he had given his best and other team members as well as. In recent times we have seen Netflix is investing more and more in Indian series and it is a better opportunity for the Indian industry to deliver world-class content. As we all know Sacred Games has been nominated for Emmy awards in the best drama category.

I hope we love Bard of Blood and give appreciations as we gave to Sacred Games.