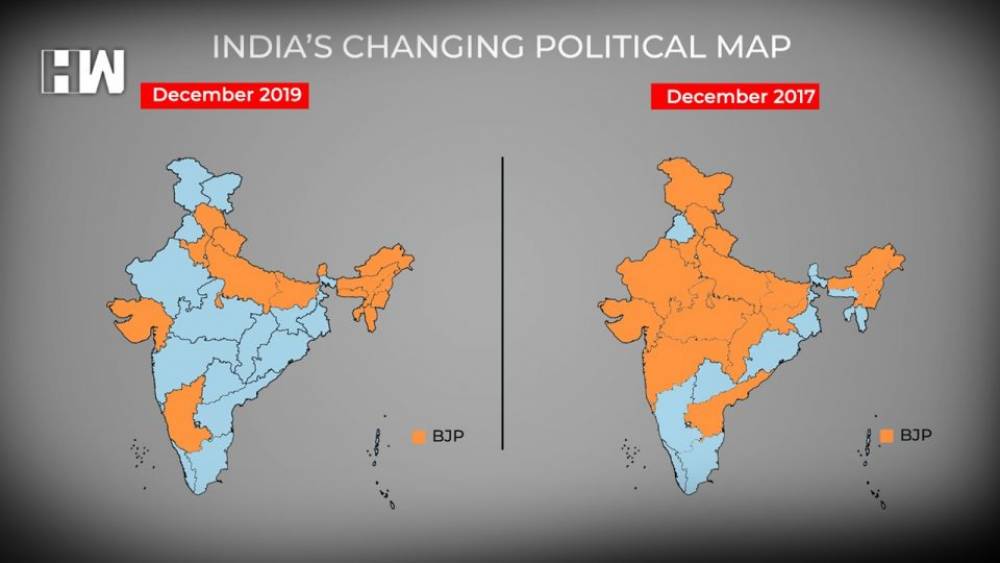 At the end of the year 2019 Jharkhand, and now defeated in Delhi in the first elections of 2020. Despite a strong performance in the Lok Sabha elections, the states are continuously moving out of the hands of the BJP. This time it was expected that the BJP could end 20 years of power in Delhi, but it is not visible at the moment. Aam Aadmi Party is moving towards absolute majority. With this fail, Delhi's name could not be added to the BJP's political map. Talking about the defeat in the assembly elections, the BJP-led NDA has lost power in seven states in the last two years, and the defeat in Delhi will be eighth.

In Maharashtra, the BJP failed to maintain power even in a nearly month-long political drama. In Haryana, however, they saved their government by the alliance. But in Jharkhand, they had to face defeat. Two years ago, in 2017, the BJP and the Allies had 19 states. But they lost power in Madhya Pradesh, Rajasthan, and Chhattisgarh. Thereafter, the YSR Congress formed the government in Andhra Pradesh.

Earlier, the BJP was defeated in Rajasthan, then Madhya Pradesh, Chhattisgarh, Punjab, and Puducherry. Despite winning more seats, they failed to form the government in Maharashtra also. The Congress alliance formed the government, defeating the BJP in Jharkhand last year. Now, the Aam Aadmi Party in Delhi is going to form the government for the third consecutive time. The non-Bjp government in these states as well. West Bengal is ruled by Trinamool Congress, where the CPI (M)-led government in Kerala. There is YSR Congress in Andhra Pradesh and TRS government in Telangana. These Chief Ministers also maintained their distance from BJP. Naveen Patnaik of Biju Janata Dal in Odisha also maintains distance from the central government. In Tamil Nadu, even though the BJP has contested the Lok Sabha elections in conjunction with the AIADMK, it has no MLA in the state.

Read also: How to change your Name and address in your Voter ID card: Know here